Some Places To Go

It has been a while since I have posted here and to be honest, I was close to not posting again.

I have begun a new project for myself and my grand kids, with some help from friends it is slowly coming to fruition. My excitement for the model rail hobby has risen since the project began and I am hoping to share this project here. Yes, I will return to the solder posts, but firstly, let's talk about Jerome Junction.

Some years ago, a project railway in an American Magazine caught my attention. I even collected suitable rolling stock to use. My taste swung to Australian prototype when our club decided to build Stockinbingal. Since that layout was retired, I have had many personal projects, saw my children grow up, changed jobs a few times and made some enforced life changes.

I have been planning to build a home layout for many years, but seemed to always be able to find reasons why not to, all the time collecting items for the project.

So here we go, I introduce to you, Jerome Junction.... 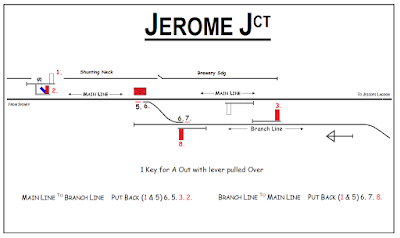 Jerome Junction is just stage 1 of my little branch line. I took a lot of advice from others and listened to some of my own. I have dispensed with earlier plans for a multi deck layout which really was just a tad much for my basic carpentry skills and settled on a fairly basic arrangement utilizing a junction and branch terminus.


The junction has been laid on a curve, giving me some space  for other items. Firstly, I drew the junction in SCARM, a free model rail cad program, then, allowing for facets of the overall plan, laid it onto panels cut from cover sheets of melamine obtained for free from a local cabinet maker. 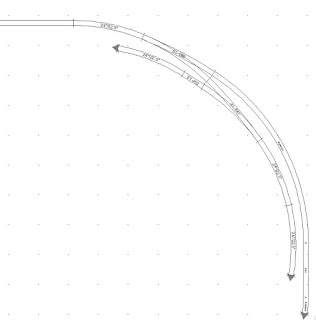 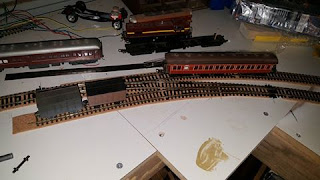 Melamine is a hard surfaced Customwood. It does not take to PVA and or paint readily, but I think I can get around that.

The grand kids have already checked out the project and even though there is only about 5 metres of track laid as yet, the next to youngest now visits and his first words are, "Pop..Toot Toot?" I think he likes trains.

The mainline, where the clerestory car sits, will terminate at a set of holding roads. To the left, the mainline is planned to run through a station just large enough to serve the junction and provide traffic management for the branch.

The branch terminates after a nice big lazy 180 degree curve at a station called Georgiavale. The station has been planned and timber ordered, more free Melamine and will be installed as soon as it has arrived.

The layout will be driven using NCE DCC. A safe working system is being planned as part of the installation. I will be following typical NSW operations using Semaphore signals, as well as staff and ticket for the branch.

An operating program will be developed to spice up a running session. Rather than get involved with a fast clock it will be more a case of next train is such and such and it will have instructions such as a cross, wait for, shunting, meet and final destination. 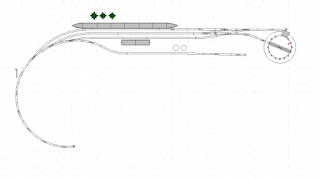 The drawing above, straight from SCARM, is Georgiavale. Fairly simple really with an interesting arrangement to access the turntable. There is a little more to work out around the table, such as coal and water, possibly a single road engine shed and I am considering two locations for stockyards, one being on the station approach.

The through station is early in the planning stages but will follow some of the features of Griffith, where I grew up. Adding interest to this station, will be an industrial line which will reach right around to Jerome Junction some 4 to 5 metres away. On this line will be several rail customers such as fuel depots and rural customers, maybe even a brewer's warehouse, Can't have a dry town.... 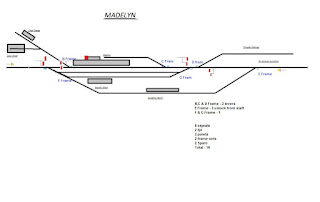 I have taken a little criticism from some of my friends for using some set track items. I think though that I have made the correct choice for me. The layout is being built in a garage, in the Riverina, where temperatures range from -4 or -5 to the mid 40s. Expansion and contraction of the rail is expected to be a factor. Even with lining and insulation, shed temperatures are not always going to be very comfortable.

To this end, I have decided to use some Atlas set track curves. These are available in larger radius pieces and at reasonable cost. Jerome Junction and Georgiavale have been been designed using Peco long curved points and Atlas 24 inch radius set track. Yes, a larger radius would have been nicer, but space is not going to allow that. I can live with 24 inch. It does mean a few more track feeds to add, but they only need to be added once.

Laying flex track to any radius is easy using track setter templates. But I felt that using 24 as a minimum, along with the possible temperature range, was asking for trouble with kinked track. The set track pieces introduce more joints into the curve for movement and a fixed radius hopefully eliminating unwanted kinks in my minimum radius curves. I did learn quickly to throw the Atlas track joiners away though, they are way too sloppy fitting and caused poorly aligned rail at joints. Easily rectified by using all Peco joiners, I simply discard the Atlas ones....

Code? I am using code 100 track. I have been collecting track and points for this project a long time and really don't want to start all over. I do have some code 55 rail stored away for other planned projects.